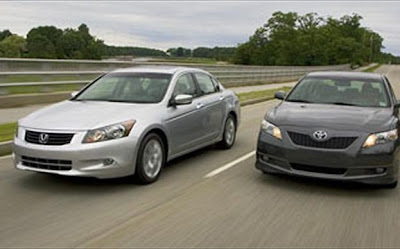 The Honda Accord and the Toyota Camry are arguably the two fastest selling, most dependable, economy cars in North America. They both have reputations for driving well beyond the 200k mile mark, they have room for five comfortably, and they get pretty damned good fuel economy. There just so happens to be a formula in the automotive industry that goes like this: 4 doors + 4 cylinders + Automatic + A/C = a fast sale. Why? Because that's what the general public wants or needs. Gone are the days of low gas prices and working on your own car, which means that folks are spending more money on potentially costly repairs and the vast amount of gasoline we consume over the course of a year. That being said, which of the two boss econoboxes reign supreme in the Land of the Free? Let's find out. 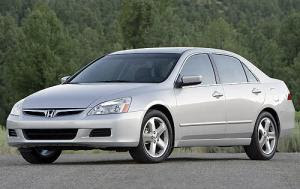 The 2.4L 4-cylinder version of the 2007 Honda Accord achieves 166hp at 5500rpms and 160 ft lbs of torque @ 4000rpms. (although most people who own these vehicles never get past that point anyway). Around town it will sip its fuel at a leisurely 21 mpg and an even more frugal 31 mpg on the freeway. The fuel tank holds just over 17 gallons, so if you average 25 mpg on a road-trip, you can travel a full 425 miles before making a pit stop. Surprisingly, the Accord only weighs in at a measly 3124 lbs, which is genuinely lightweight for such a large sedan. A lot of the weight reduction can be attributed to the fwd layout, but still, good job Honda. We'll be seeing much more of you in our future. 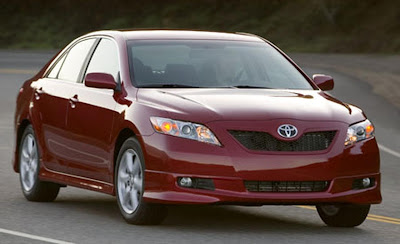 Oh, Toyota, why you continue to create the most blase, efficient machines I will never know. What I do know is that they have been following the same general rule with each new model year. Make it more efficient, more boring, and more appealing to those who don't know how to drive. Interestingly (not surprisingly) the Camry has just eight less horses and an extra ft lb of torque from the same displacement block. (2.4L, 158hp/161tq)  Although the power figures are eerily similar, the Camry is the heavyweight in this duo weighing a full 3300 lbs. 140lbs may not seem like a helluva lot, but for every hundred pounds shaved off the curb weight, that translates to faster sprints from 0-60 and lower quarter mile times.

Now all this information begs the question: which of these two marvelous machines are King? Personally, I would go Honda every time because they have a cult-like following the world over and have a vast aftermarket that is relatively inexpensive for those of us with limited incomes. Toyota builds a high quality product, to be clear, but that simply cannot take away from the fact that it in fact, the most dull, boring, ugly car I've ever laid eyes on. There, I said it. What do you think? would you take a Honduh or a Cramry? Either one will save you money and lose you friends. Choose wisely.