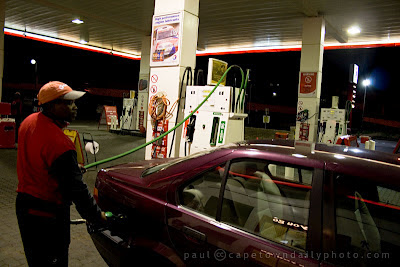 This is an excellent how-to guide I found in a recent article on Yahoo.com. We all know that driving a more fuel efficient Hybrid is a really easy, direct way to save money on gas, but what about those of us who don't want one? What can we do to save money at the pump? Some of these tips are fairly obvious, but when I read a couple, I thought to myself, "Wow, that sounds like it could actually work!". Check 'em out and let us know how YOU save money on gasoline.

Gas prices are inching toward record highs, but experts say how you drive and where you buy your groceries can cut the costs of filling up.

Prices at the pump currently average $3.84 for a gallon of regular unleaded, 30 cents more than a month ago, according to AAA. (The record is $4.11, hit in July 2008). Drivers in 16 states plus the District of Columbia pay even more -- and in eight of those prices already top $4 per gallon. Consumers shouldn't expect relief in coming months, either, says Tom Kloza, chief oil analyst for the Oil Price Information Service. Cost per gallon typically peaks in May after refineries complete the switch to summer gasoline blends, which are more volatile than winter blends and so, more expensive. As a result, drivers could see prices rise another 5 to 25 cents, he says.

Some motorists are better positioned than others to save, experts say. People in states along the Rocky Mountains have some of the lowest prices nationwide -- as cheap as $3.43 in Wyoming -- due to their proximity to U.S. supply and refineries, Kloza says. And those cruising around in a new 2012 model may experience the fruits of manufacturers' latest fuel-efficiency push, says Jim Kliesch, research director for the Union of Concerned Scientists' clean vehicles program. Many new models offer features such as lightweight metals and stop-go technology that shuts an engine off at stoplights and in gridlock, he says.

But the vast majority of drivers need to make more of an effort to save on gas by taking smaller actions that improve fuel economy and reduce costs. "No one individual [fuel-efficiency] tactic stands far above the rest," says Kliesch. "It's a handful of simple things you can do that together offer a reasonable improvement in your fuel economy."

Driving a vehicle that isn't at its most fuel efficient can be equivalent paying an extra $2 or more per gallon, simply because it burns through a tank much faster. Here's how to avoid that premium, and knock a dollar or two more off your per-gallon price:

De-clutter
Savings: Up to 7 cents per gallon.

There's good reason to clean out the junk piled in the trunk, says Kliesch. Every 100 pounds of added weight in a car reduces its fuel economy by up to 2%. That works out to paying an extra four to seven cents per gallon. Hauling a cargo carrier, bikes, kayaks or other gear atop the car for a road trip is worse, decreasing fuel economy by 5%.

Weigh payment methods
Savings: Up to 19 cents per gallon.

As gas prices rise, many credit cards' reward caps on gas purchases kick in, limiting their value, says Odysseas Papadimitriou, chief executive of CardHub.com. He likes the PenFed Platinum Rewards card, which requires a $15 credit union membership but offers five points per dollar spent at the pump. (At $3.84 per gallon, that works out to about $0.19 back.) In some instances it could make more sense to pay cash. Stations may offer discounts of up to 10 cents per gallon for drivers who eschew plastic.

Drive responsibly
Savings: Up to $1.27 per gallon.

By the U.S. Department of Energy's estimates, each 5 mph one drives over 60 mph adds $0.30 per gallon to the gas bill. Aggressive stops and starts waste another 33% at highway speeds and about 5% at slower, local speed limits. "Don't try to jump off the starting block," says Avery Ash, manager of regulatory affairs for AAA. Calmer driving translates to savings of $0.19 to $1.27 per gallon.

Check the tires
Savings: Up to 12 cents per gallon.

Under- or over-inflated tires change the way the car handles, adding drag and speeding wear. That, in turn, reduces fuel efficiency by about 3%. Look to the driver's side door panel or owner's manual for information on proper inflation levels, Kliesch says. Don't go by the figure stamped on the tire -- that's the maximum it can handle.

Use grocery discounts
Savings: Up to $2.20 per gallon.

Many big supermarket chains now tie in-store spending to discounts at the pump. Depending on the program and one's typical grocery bill, savings could range from 10 cents off to as much as $1.50 per gallon at Albertsons or $2.20 at Giant, says Teri Gault, the founder of The Grocery Game. But shoppers may find that prices at partner stations are higher than others in town, eating into savings, she says. Programs typically have a cap on the number of gallons one can get at the discounted rate, although households may still be able to fill two cars on the cheap.

Create a fuel-efficient route
Savings: Up to 30 cents per gallon.

It's possible to cut down on mileage just by running a few errands on the same trip, and choosing more efficient routes, Ash says. On longer trips, use a GPS to find the best route -- and price-mapping apps like AAA TripTik or GasBuddy to find the best fuel deals along those routes. Prices in Ypsilanti, Mich., for example, currently range from $3.81 to $4.09, according to GasBuddy. That's $0.28 per gallon advantage to shopping around.

Source: Yahoo!Finance
Posted by Unknown at 10:15 AM

Email ThisBlogThis!Share to TwitterShare to FacebookShare to Pinterest
Labels: Interesting, Rants and Raves